Off camera flash at Carlingford is something Ive been trying to find time to do for way too long! Given the weather over recent days, with temperatures of 30˚C and over, clear blue skies and great evening sunsets, I finally made the trip down to Carlingford on Thursday evening.

I’ve visited Carlingford many times so I had a rough idea where I might try for locations. It wasn’t quite that simple though, as a full setting sun and cloudless sky meant harsh light and shadows. That narrowed down the options quite considerably at some of the locations. More on that below.

Below is a selection of photos from the evening, in order as the evening progressed. (Click on the photos). 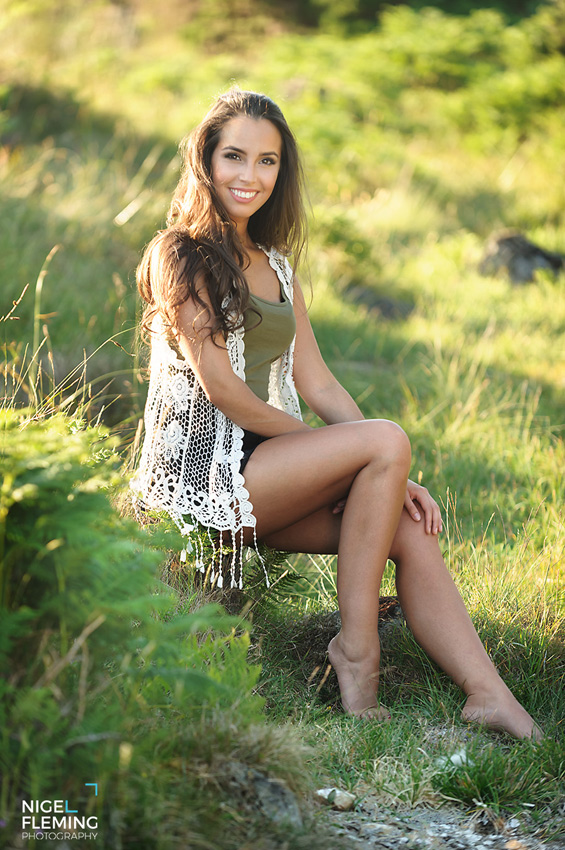 This was our starting point for the evening, up in the mountain between Omeath and Carlingford. No flash was used here. A spot was picked in the shade for Emily, but where she would be backlit with the low evening sun. As this was on the open mountainside, there was plenty of light for a large reflector from the front to subtly fill the shadows on Emily. 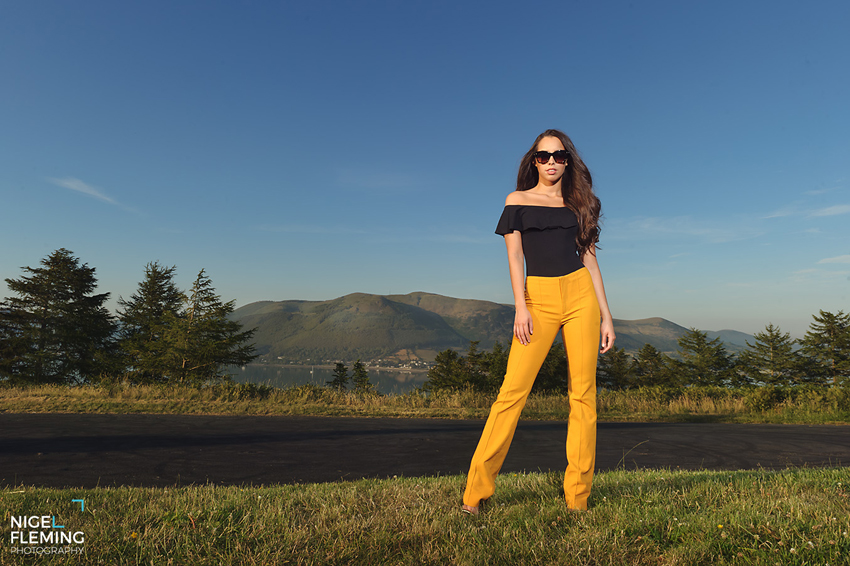 Our second location was a short drive back into Omeath to get over onto the other side of the mountain. This was our first setup of the evening using off camera flash at Carlingford. I really wanted to use this well known backdrop, looking across Carlingford Lough into the Mourne Mountains in the distance. The big problem here though, was hard and direct sunlight which was coming perpendicular to Emily from absolute camera left. The resulting sunlight on Emily was dreadfully harsh with deep cross shadows everywhere, but I really wanted this backdrop.  A hard light off camera flash was added from slight camera left which evened out the light really well on Emily and eliminated the harsh sunlight shadows. To give an indication of the strength of sunlight, this was captured at f16 and the flash was a Godox 360 at half power. 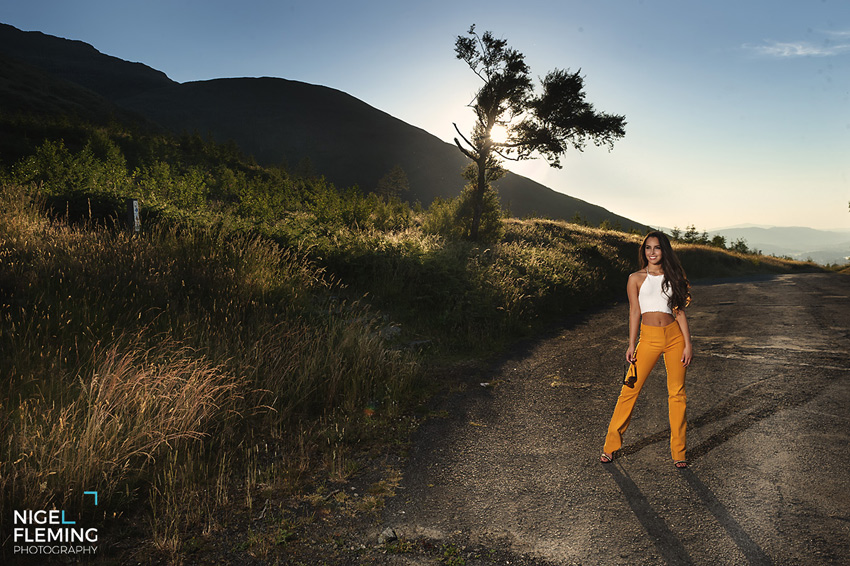 Sticking with the same carpark location on the mountain, this was directly back into the sun. The sun was still just about above the mountain, composed to place it behind the tree. It was throwing really great, long shadows and texture. Just look at the texture in the tarmac of the carpark to see how great the low sun was rendering the scene. A hard light off camera flash was added here, just like the previous setup. 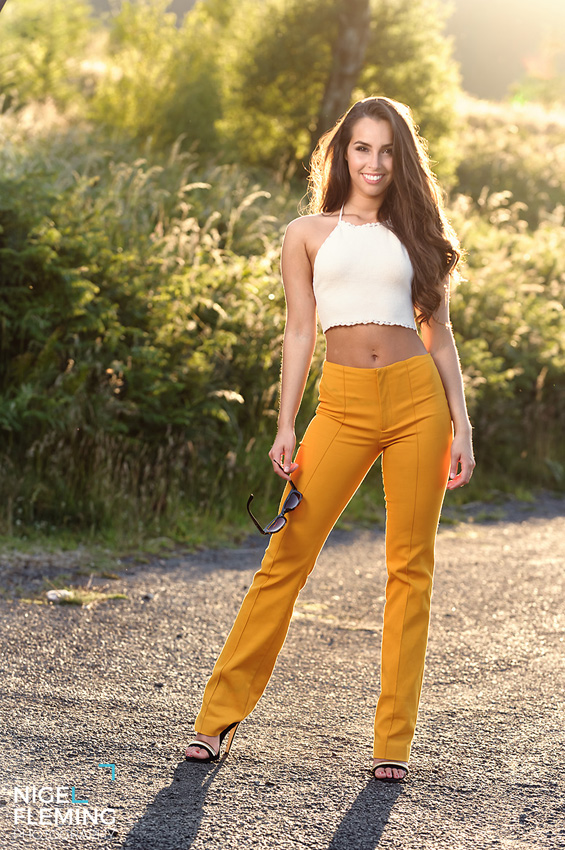 This is exactly the same location and model position as above and captured immediately after the above photo. The approach, composition and setup here was a big shift from previously though, resulting in an entirely different feel to the photo. Removing the really bright sky in the composition allowed for a drop in aperture from f16 to f4, and a change to a soft light off camera flash now with the much wider aperture. The sun was used as back light and flash for fill. 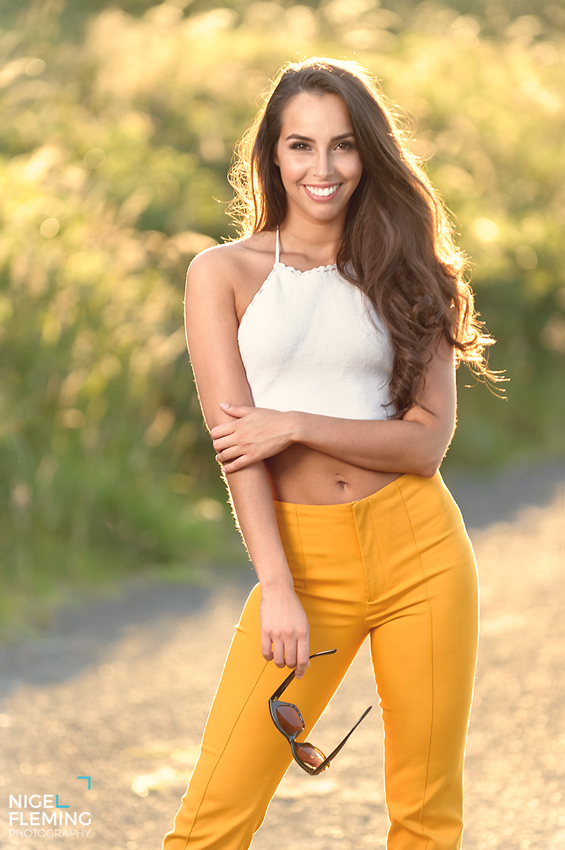 Exactly as above but a three quarter length tighter framing. 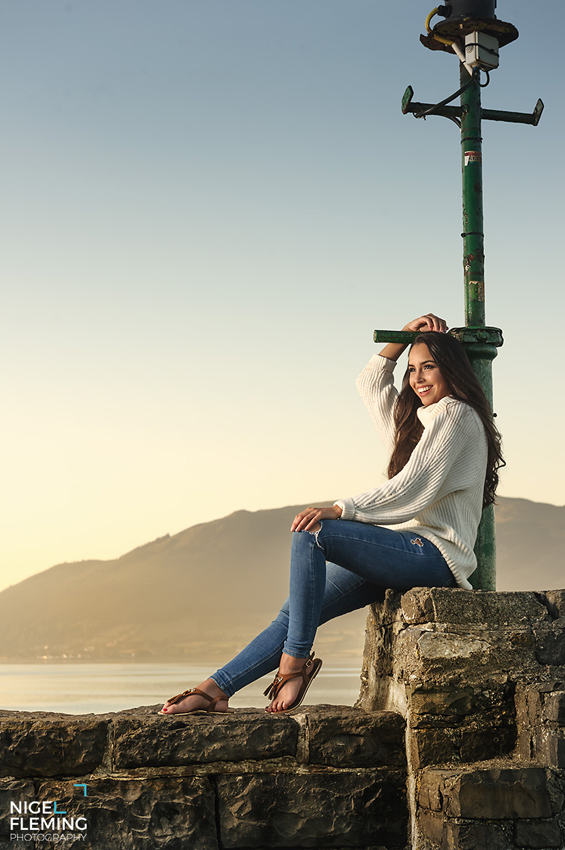 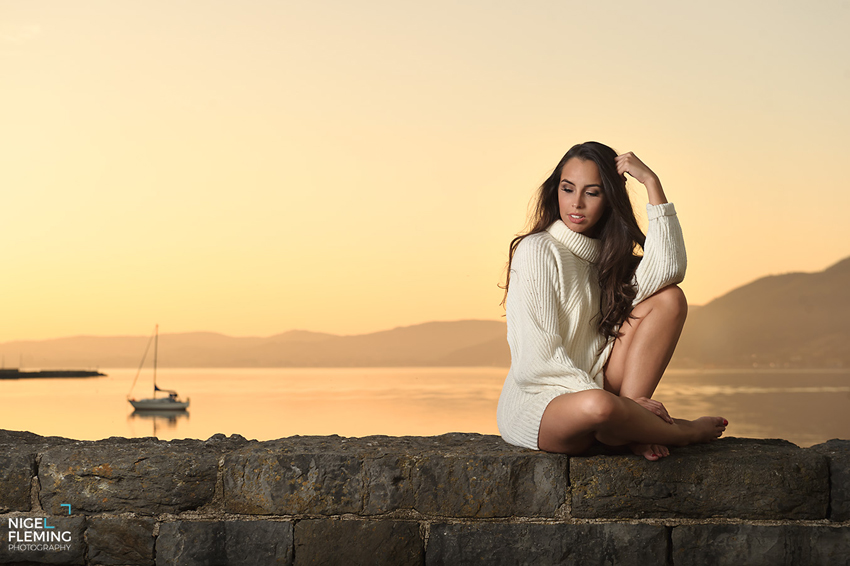 I really wanted to use the small yacht over the harbour wall in the scene, which then dictated the landscape orientation of this setup. This was an off camera flash from camera left, but gelled to allow for a big white balance shift in camera. I wanted to increase white balance to render a really warm sky. The trade off with that was the need to gel the flash to neutralise the light on Emily. 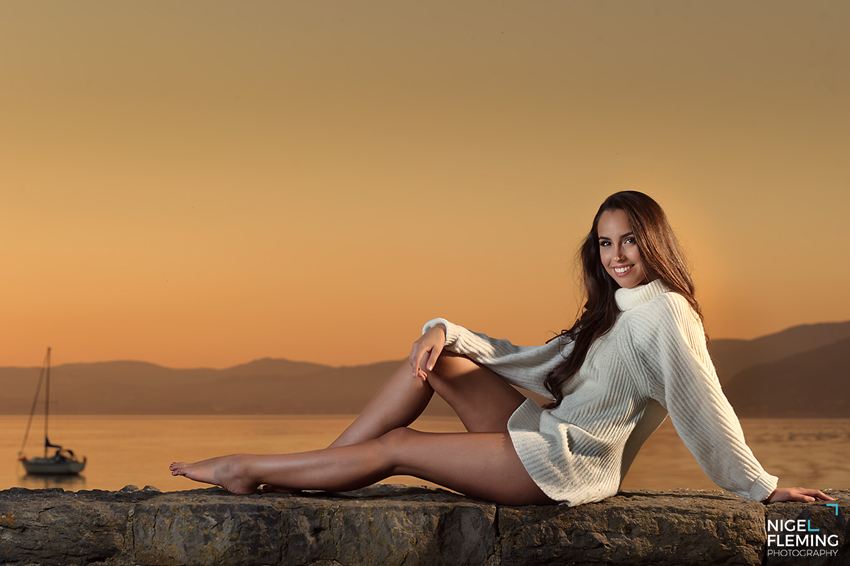 Exactly as above, but a second off camera flash was added from camera right to backlight Emily and slightly warmer white balance setting. 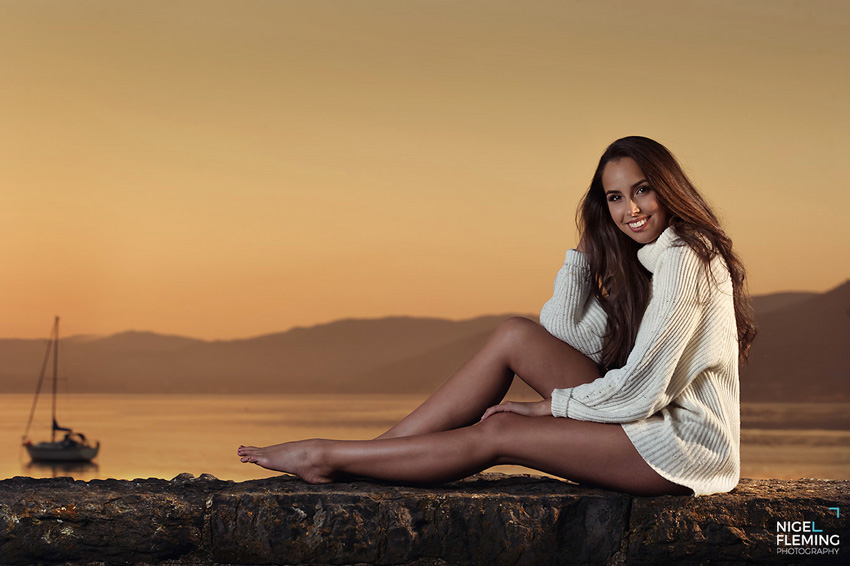 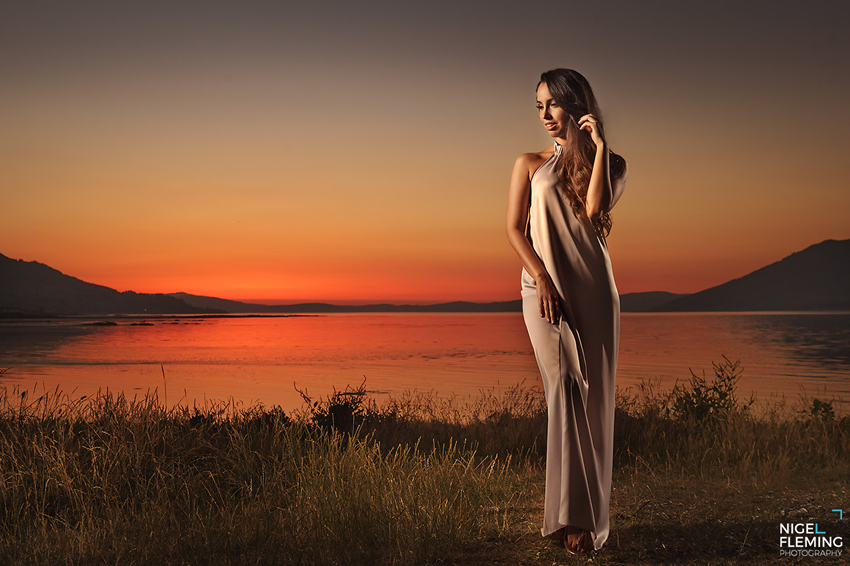 A change in location again to our final setups of the evening. We were gifted with the most spectacular sunset and this location was perfect. The colours you see were pretty much what was there at the time, and in fact I dropped my white balance back to a more neutral daylight setting as the sky was looking over saturated in camera. (A nice problem to have). Emily’s dress had great texture, so it was lit with careful positioning and direction to the off camera flash on camera left. Another off camera flash was added to subtly back light Emily on camera right. 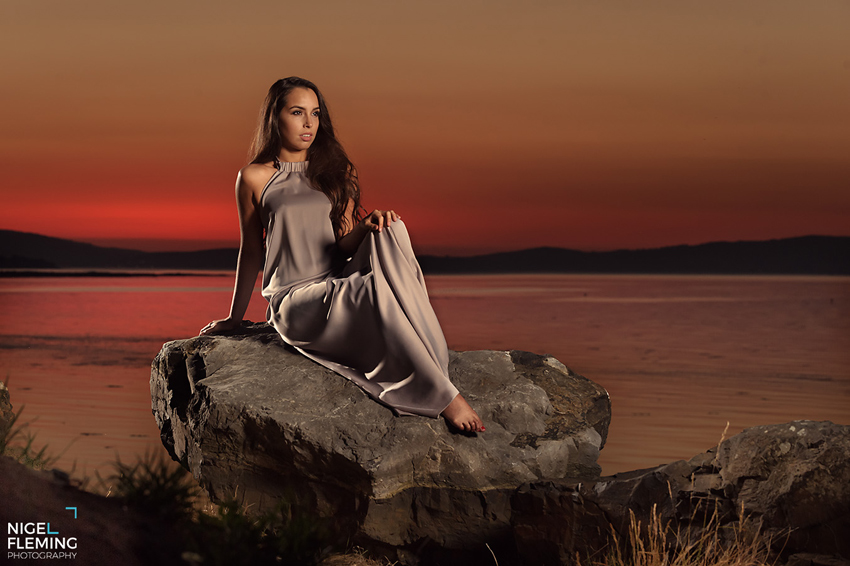 This was another setup just beside the position of the above photo, and with similar lighting, though the available light was fading fast. 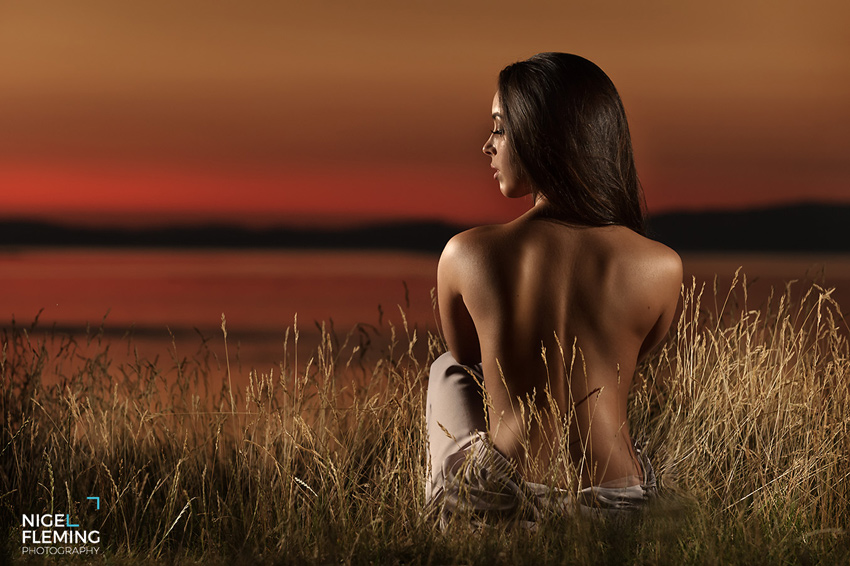 At this stage we were really pushing it with the available light. This idea was based on a similar setup I do frequently in the studio. On that note, I always say that most of my off camera flash lighting setups are studio based lighting setups, but used on location with portable off camera flash, and ambient (natural) light added into the exposure.

I hope to be running an off camera flash sunset evening workshop at Carlingford on Monday 9th July.  If you would be interested in attending as a photographer then please get in touch here. Details to be confirmed in the coming days. Model will be Emily as above.