Thankfully the weather was considerably milder than the last few recent workshops at Parkanaur Manor over the winter months, though we did encounter a random heavy shower of rain while outdoors in the afternoon.

Thanks to a great group of photographers who attended, and Emma for modelling.

We got through twelve setups throughout the day, despite the rain in the afternoon, and here is a selection with some lighting discussion below. 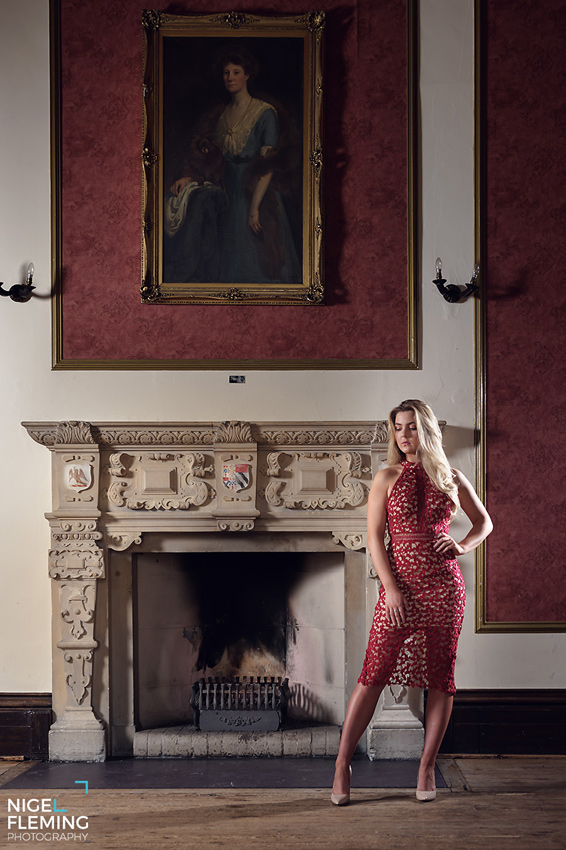 Following coffee and a chat with the photography group on the use of off camera flash, this was our first setup of the morning. This put everything into practise which we had talked about. We discussed lighting position, metering for the ambient light, and how to control how much of the background is lit by flash. Here two off camera flashes were used, the main light from camera left, and a hair light from camera right. 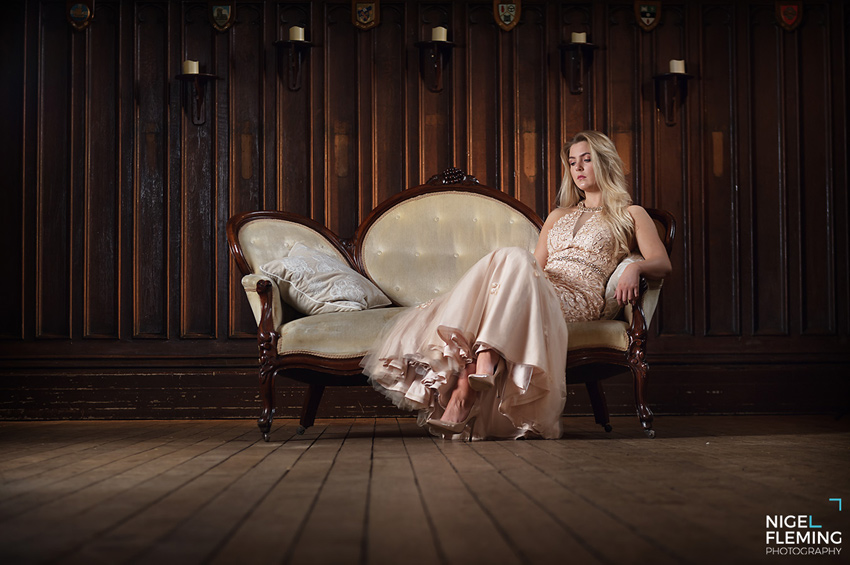 This was our second setup of the morning. Here we discussed best use of natural light coming into the room from high level windows on camera right, in an otherwise dimly lit room. Off camera flash was added as main light on camera left, and a warm toned gelled flash was also added to light the wooden panelled back wall. 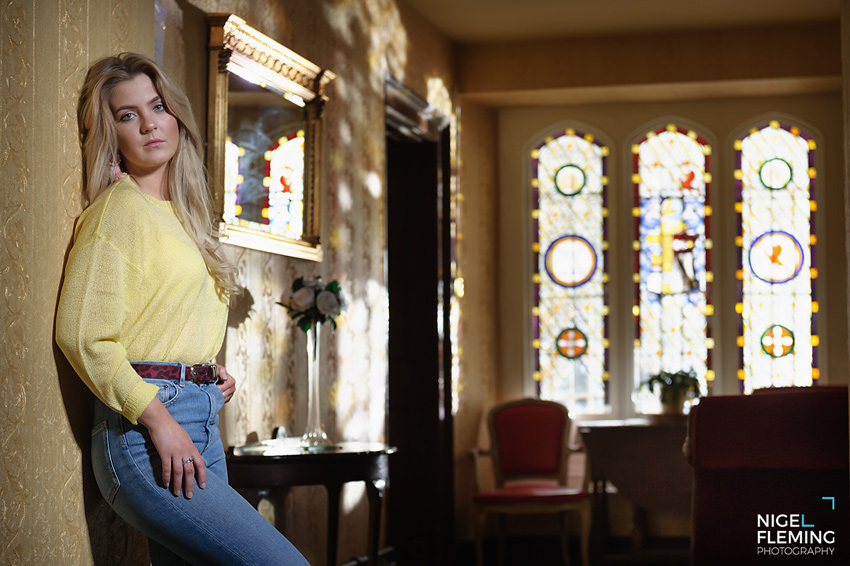 Following some lunch I tried a new lighting setup. I’d often walked past this stained glass window and thought about using it. I placed an off camera flash outside to illuminate through the window and right to left in position. The aim was to create the pattern from the window up the inside wall behind model, Emma. A small beauty dish off camera flash was added to light Emma from the front. 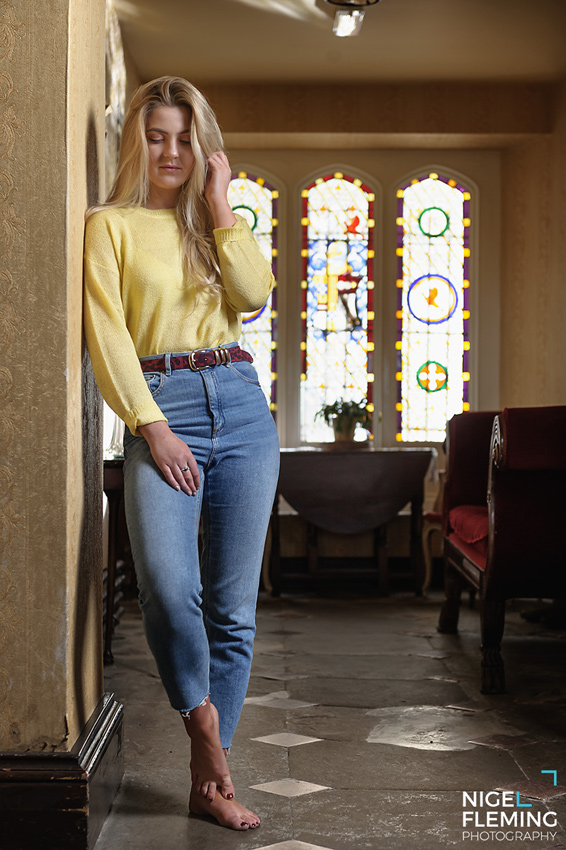 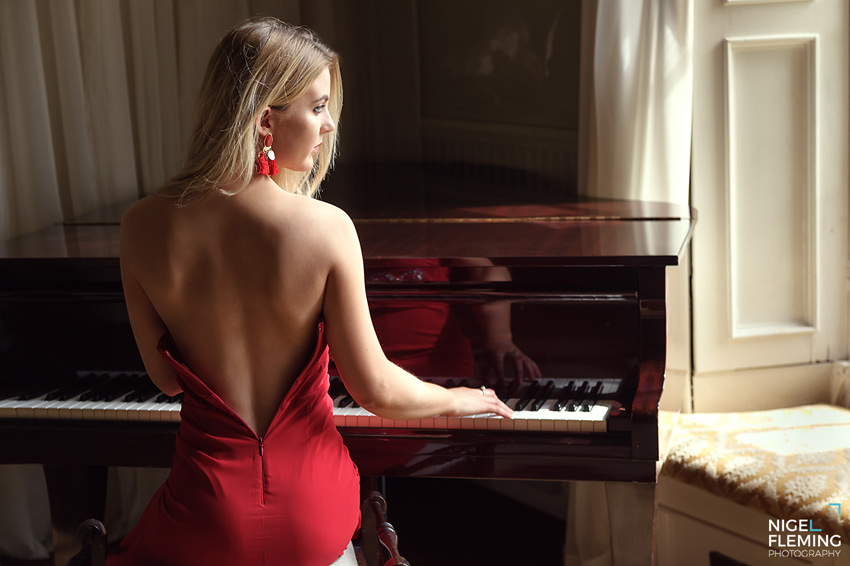 Next we moved into the piano room. As it was an overcast day outside, the light coming through the large window camera right was soft and very useable. I set up a flash as a back light which we used optionally. 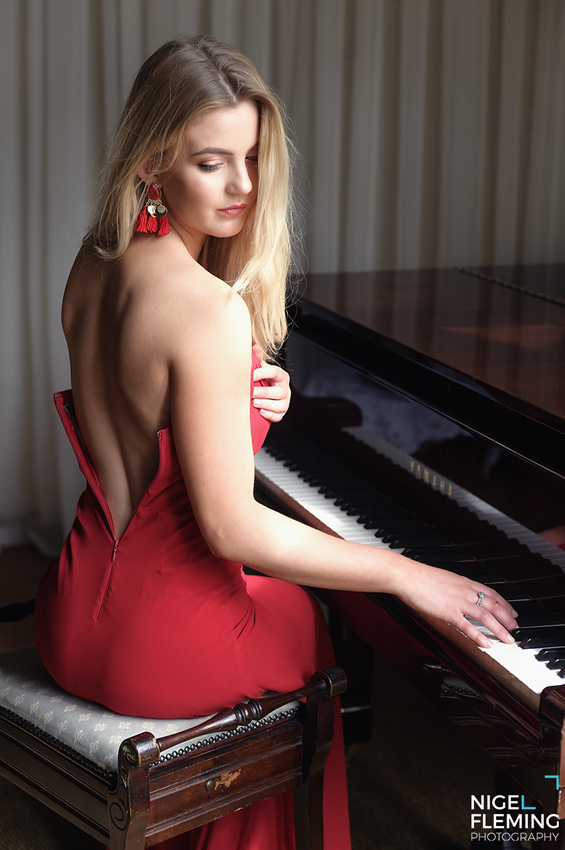 Natural light from the window as above. 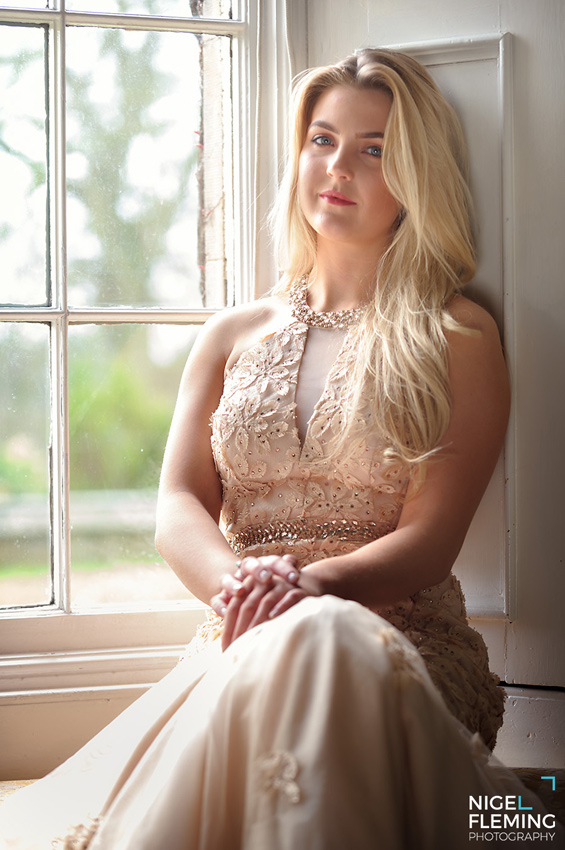 Sticking with the soft window light we didn’t use any flash with this one. A reflector was used to fill the shadows. 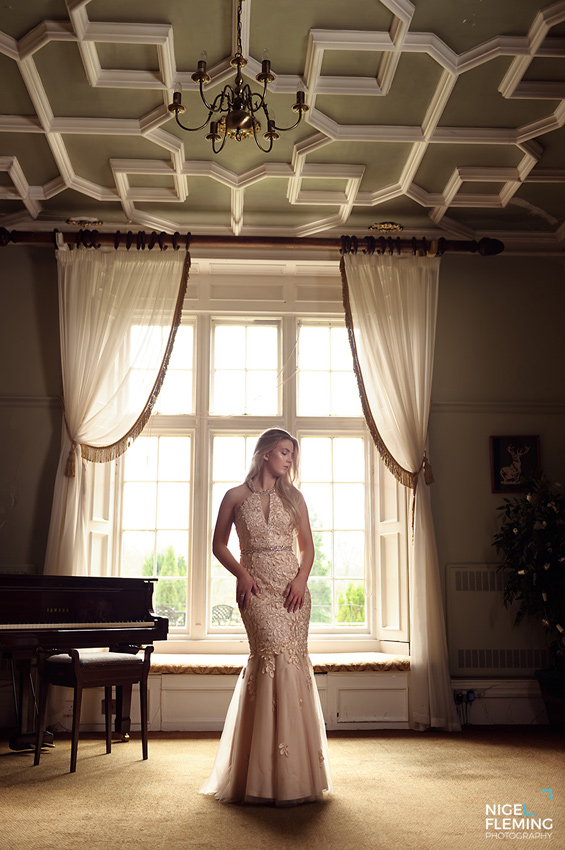 An off camera flash was used for this final inside setup in the piano room. 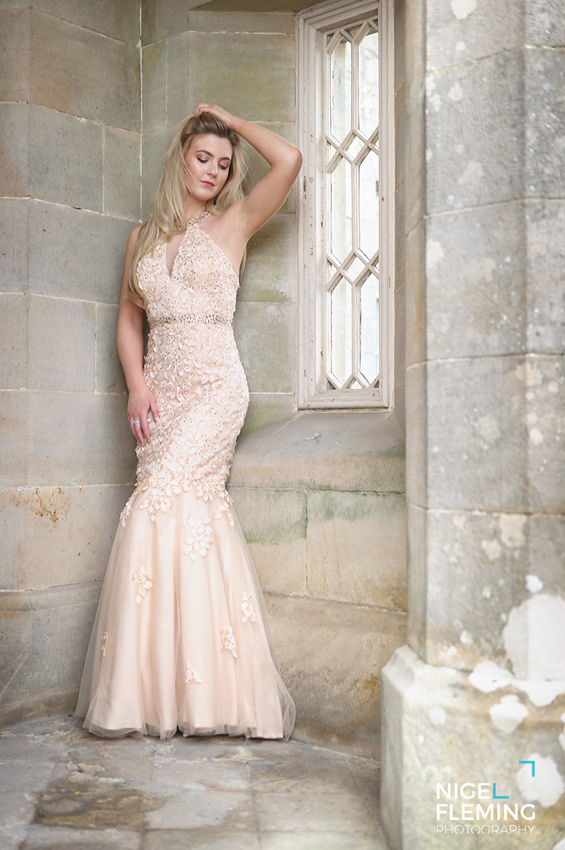 This was our first outdoor setup. This was just inside the outer porch way to the house, and the natural light was very good. This gave the opportunity to do a very subtle fill flash setup. This was all about making the flash blend seamlessly with the available light. 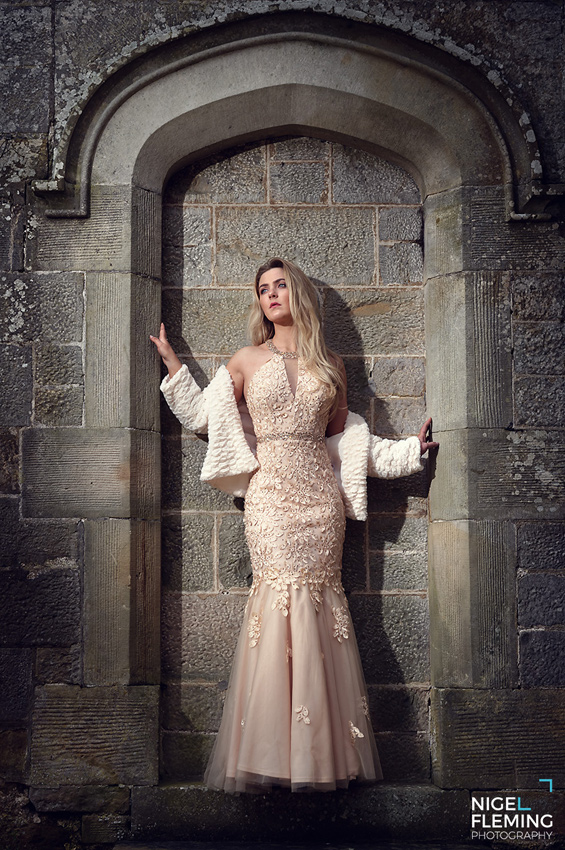 From subtle fill flash to flash with impact! This was just around the corner from the previous setup, and an outside wall which was in shade. Here we discussed deliberately under exposing the ambient light, and adding off camera flash to create a much more dramatic look to the light. 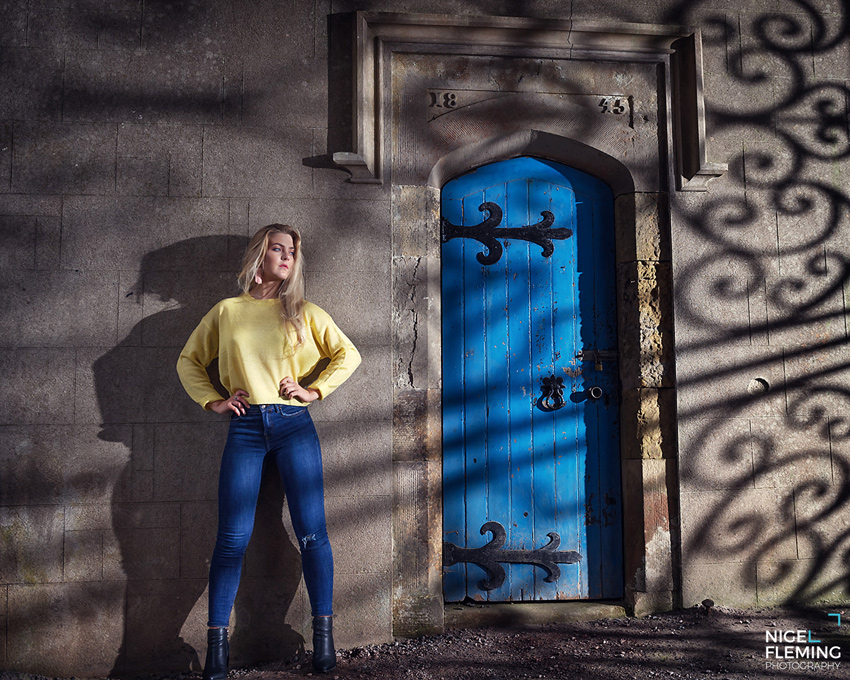 Next we moved around the corner, and anyone who had attended one of my Parkanaur Off Camera Flash Workshops will know this is the entrance to the car park. Here the flash is simply directed through a closed wrought iron gate to create the shadow pattern of the gate on the wall. 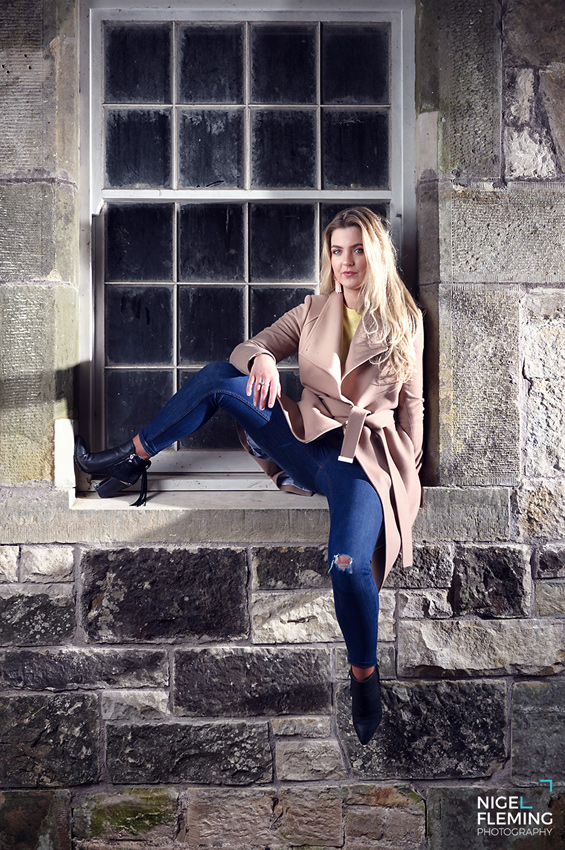 This setup wasn’t on the list! While doing the previous setup, the heavy rain arrived. This area was inside an archway at the bottom of the car park so we did this while sheltering from the rain. This was a two light setup. 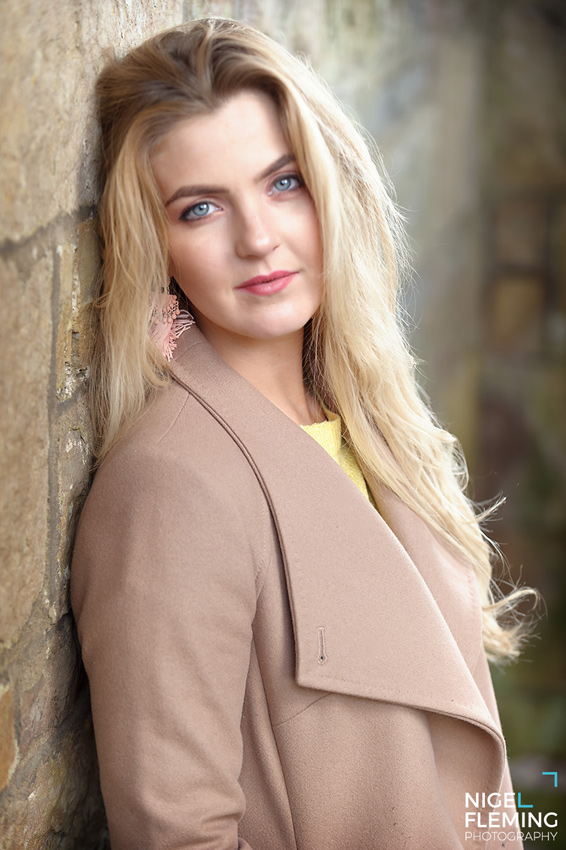 This was inside the same archway while the rain continued. Two off camera flashes were used here. One from the front in beauty lighting position, and one as a hair light behind. 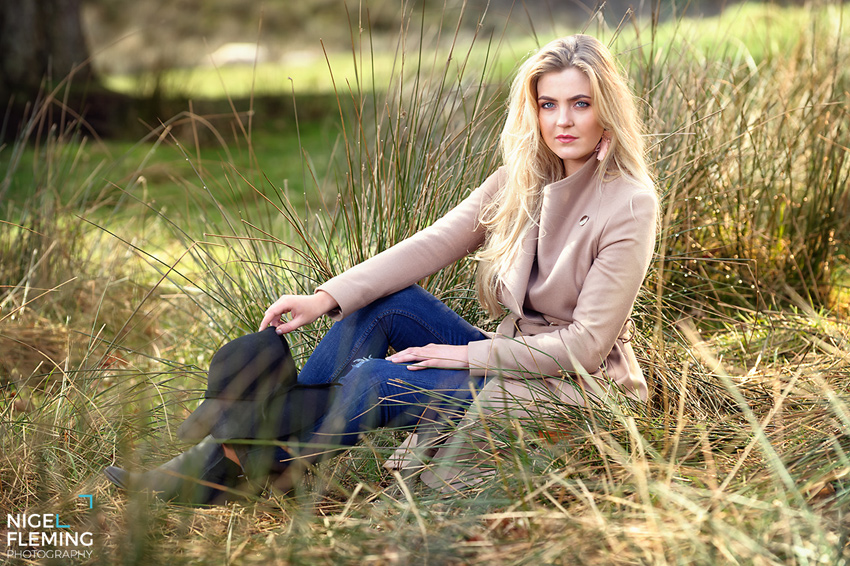 As the rain eventually stopped, I don’t think anyone quite believed me, especially Emma, when I suggested we go into the field beside the house for our final setup. Here two off camera flashes were used. One was the main light camera left, and the other was a back light which was gelled to create a warm tone to the background. 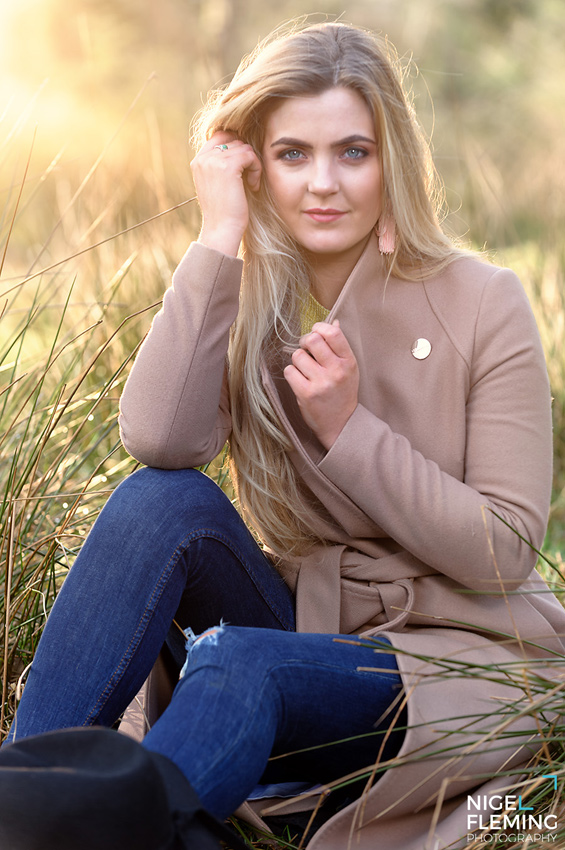 This was a slight modification in position of the gelled back light to create lens flare, and the impression of a warm evening setting sun on what was an overcast day.

I hold regular off camera flash speed light workshops at Parkanaur Manor. If you would like to attend the next one then please message me here.