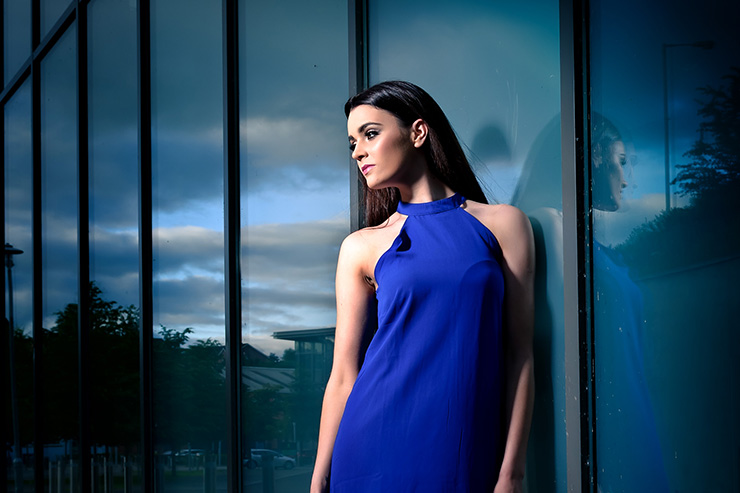 Is it possible to gain a good understanding of speed lights and off-camera flash in 3 hours? I think it is, and especially so after we put that to the test on Thursday evening.

Off-camera flash workshops remain as popular as ever with photographers, and in addition to my Introduction and Advanced full day workshops, I decided to bring together this express/speedy type workshop to take advantage of the long daylight evenings of summer, hence the name ‘speedy speedlights’ 🙂

There’s simply no getting around the fact that flash in photography is technical, and requires getting your head around a lot of things at once to enable a good understanding of how it all works. Many natural light photographers especially, by their own admission struggle with adding flash, but one thing they do have in abundance is a sound understanding of exposure. In my experience and in my workshops this is the key foundation block for off-camera flash.

With a good understanding of exposure (aperture, shutter and ISO) that’s half the battle won already. I firmly believe in encouraging attending photographers to think about it all for themselves. It’s critical not to just spoon feed camera settings to the attending photographers with the lighting already set up. If I did this then yes, they’d have great images in their camera to take home but would be none the wiser as to how to achieve the same results themselves.

With all this in mind I threw it open to photographers if they’d like to attend a ‘Speedy Speedlights Workshop’ evening over a total of 3 hours. The only prerequisite was that they have an understanding of exposure without using flash. Six photographers very quickly booked and we had a group of varied experience. Some had never used flash before at all, some had used it in a limited way on-camera, and some were confident commercial photographers who use flash daily in their job.

We had a great evening in and around various parts of the Linen Green Complex. This is where my studio is located and it really couldn’t be more ideal in terms of contemporary, colourful and textured backgrounds, all within 5 minutes walk from the studio door.

Here’s a few images from the 3 hour session. 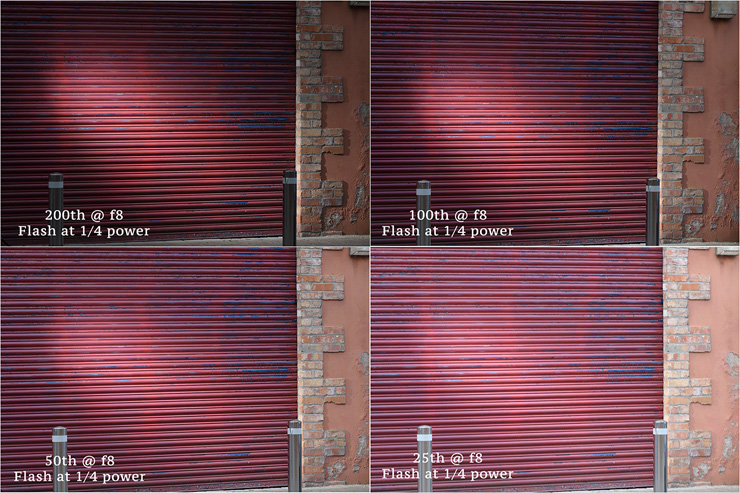 Following a short discussion in the studio I set up the above using a shutter on the shop unit just directly opposite the studio. This meant I could capture these from inside my studio front door and importantly have my camera tethered into larger screen on the iMac. I’m a great believer in the old adage of ‘seeing is believing’. I know I’d much rather see something demonstrated than read or be told about how it works. The photographers could see for themselves here in real time how the shutter speed impacted on the ambient light exposure, yet the flash exposure remained unchanged with the flash power and distance remaining constant throughout. 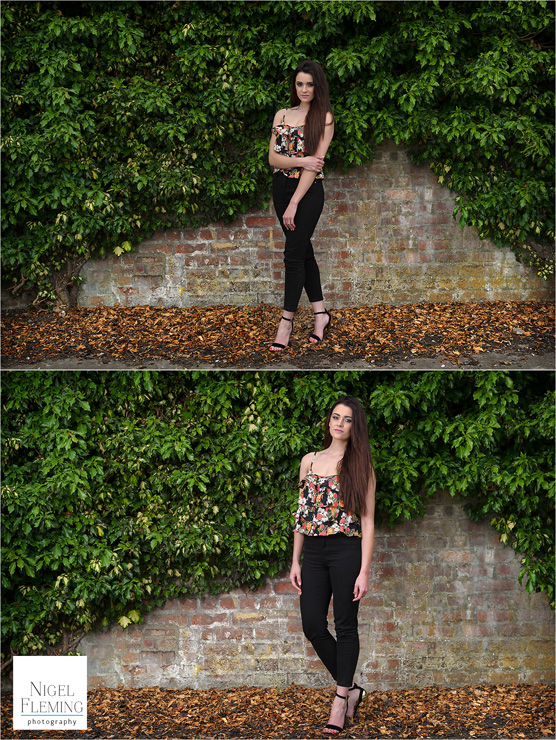 We were quickly out and about and getting as many setups fitted in as possible. The idea was to be speedy and learn on the job.

While off-camera flash is more known for its dramatically lit look to images, it’s always good to have a grounding in subtle fill flash and that’s where we started. The photo at the top shows no flash, and the bottom one has flash added to be just enough to lift the shadows, yet not be noticeable that flash was used. In my book the ability to seamlessly mix ambient light with flash is an extremely valuable tool for a photographer. 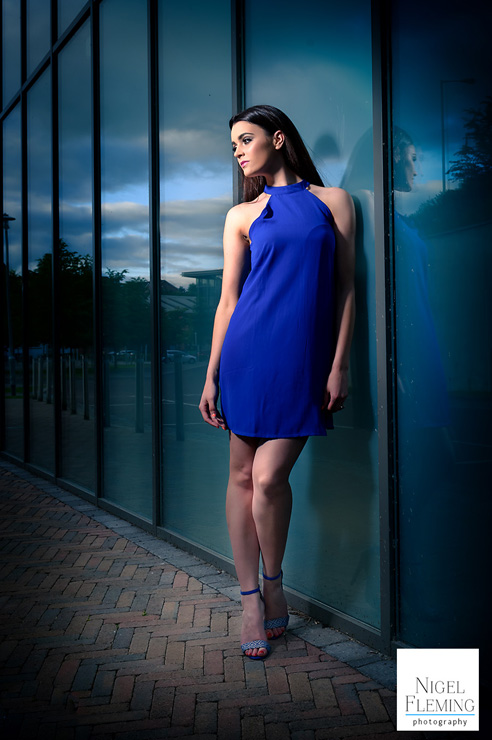 Fill flash is fill flash and while its vitally important, it has no further creative uses. Many photographers who embrace off-camera flash do so to get creative. The basic principal of deliberately under exposing the ambient light and adding flash is where all then options open up.

The photo above was using the contemporary glass side of a restaurant in the Linen Green. Its a location I use regularly. The reflection is everything. 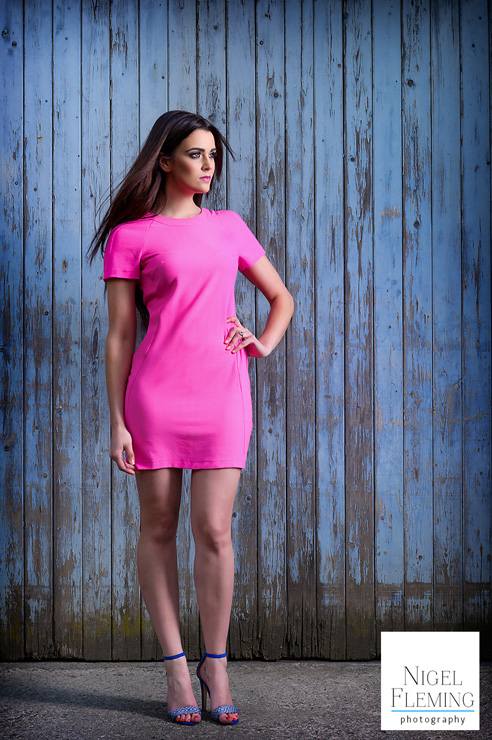 Another tried and tested location on my off-camera flash route around Linen green. Here we used a larger studio light modifier to create a different look. 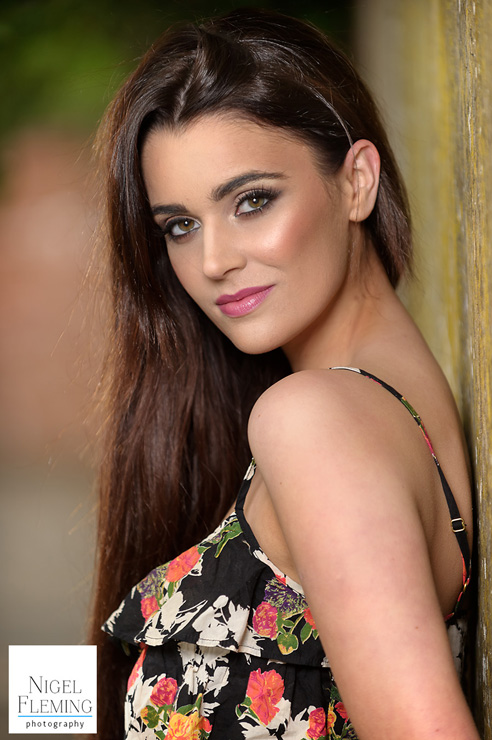 Moving on to the next location stop I added a second flash from behind. A warm white balance was used to add to the sunset evening look. 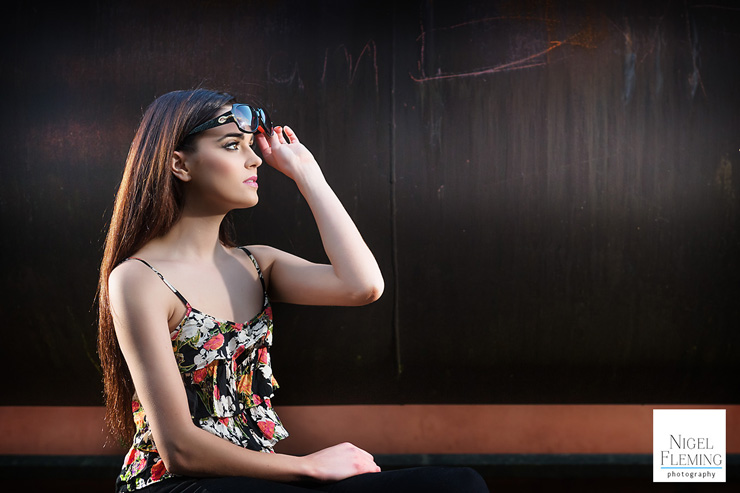 This was our final location for the evening. Its an old disused and rusting oil tank at the furthest most point in the Linen Green car park. We used two lights here again but kept the light source hard and directional.

I will be holding more of these ‘Speedy Speedlights’ workshops over the remainder of the summer until the shorter evenings means we’ll run out of light. It’s also an opportunity to work with a professional model and the added bonus of great pictures to take away and edit. If you would like to attend one of these evening workshops the cost is £40 and limited to 6 photographers per session.