On Monday I was kindly invited to an old disused derelict factory on the outskirts of Lurgan by fellow photographer and friend, Michael Carbery.

This was a great location with many graffiti walls throughout the interior, and a real lighting challenge. Areas of the factory had an abundance of natural light, while other areas were quite dark. Additionally there was direct hard sunlight shining in through the many windows, creating sometimes unwanted highlights on the interior.

We could have spent much longer at this location, but unfortunately severe cold forced us to finish up. Thanks also to Zoe for braving the cold and modelling at such short notice.

Here’s a few images from the day, and some details on the setups where additional lighting was used. Click on any photo for a better view. 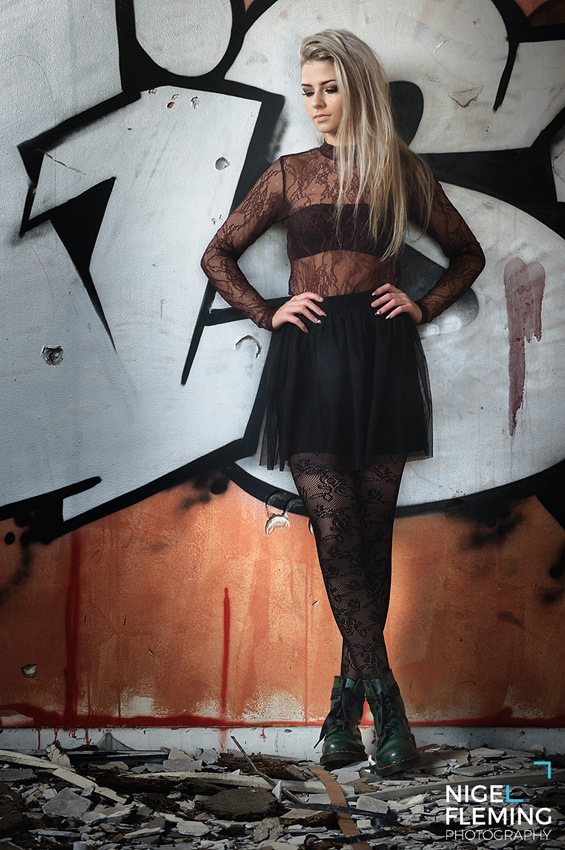 This was our first setup of the afternoon. Here the natural light was quite flat and not very exciting. I deliberately stepped down the exposure of the natural light and brought in an off-camera flash through a large soft box from camera left. The result was much more saturated colours and much more pleasing directional light on our model, Zoe. 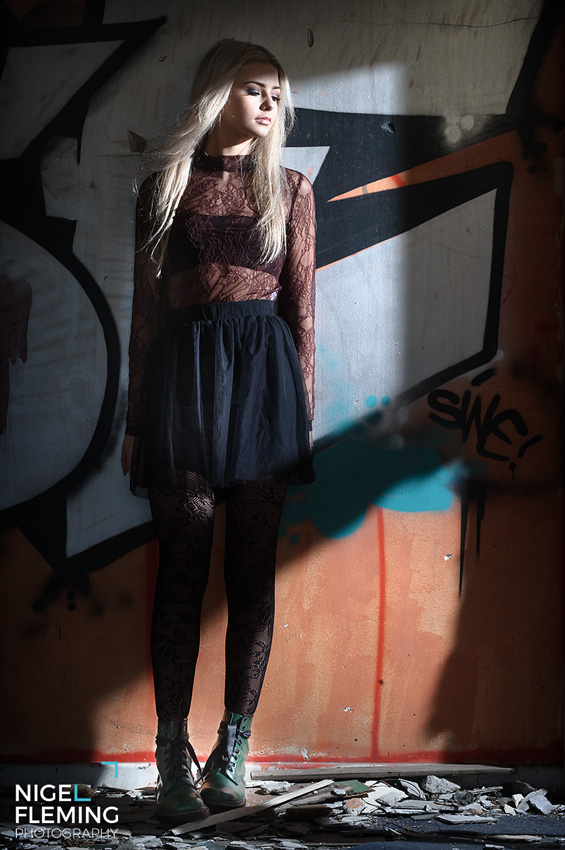 The same location and wall as above. This time I stepped the exposure of the natural light down another few stops. I moved the off-camera flash from camera left of the previous setup, to camera right, and removed the soft box to now create a hard light. The reason for creating a hard light was to cast a well defined pattern of light and shadow on the wall. I created this pattern by placing the flash behind a door to camera right. The door had its internal panels removed, leaving only the ‘bones’ of the door. My idea was to create the illusion of sunlight in this photo. 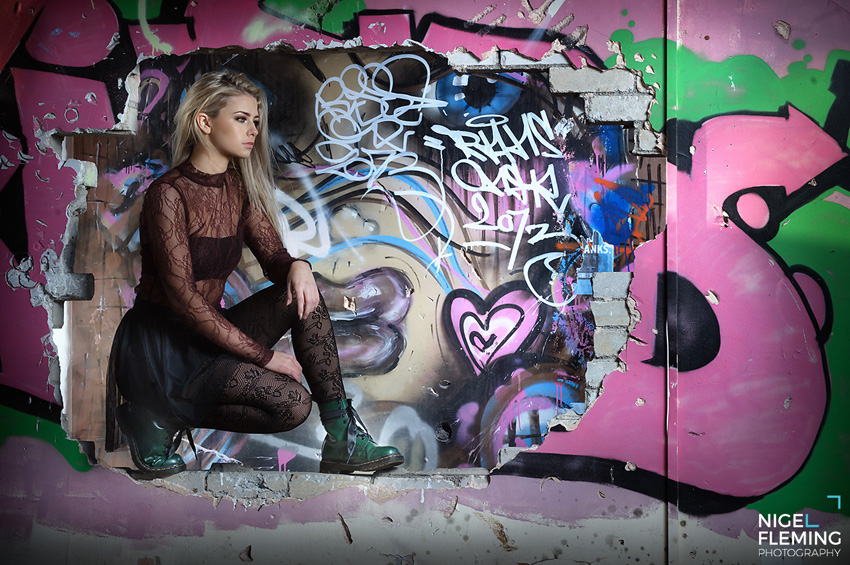 This was our second location within the derelict factory. This was a large hole in the graffiti wall in the foreground, and another graffiti wall behind in the next room. This was quite a lighting challenge as you can see from the photo below. Lighting on this was with two off-camera flashes. One was camera right through a large soft box to light Zoe, and the second was placed behind to light the back graffiti wall. 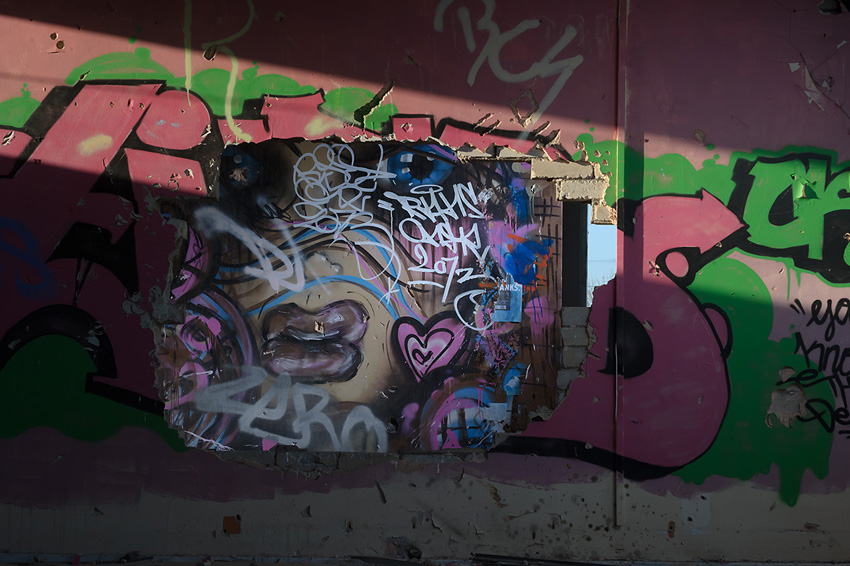 This was the scene as it appeared before modifying and adding off-camera flash. There was a streak of unwanted sunlight on the wall which was coming in through a high level window on camera left. We removed this streak of light completely by using an old sheeting board, held up to the window to block the direct sun.

This was the third setup. Here I simply opted for a bright style natural light approach. I set the white balance in camera to give a cooler tone to the photo. 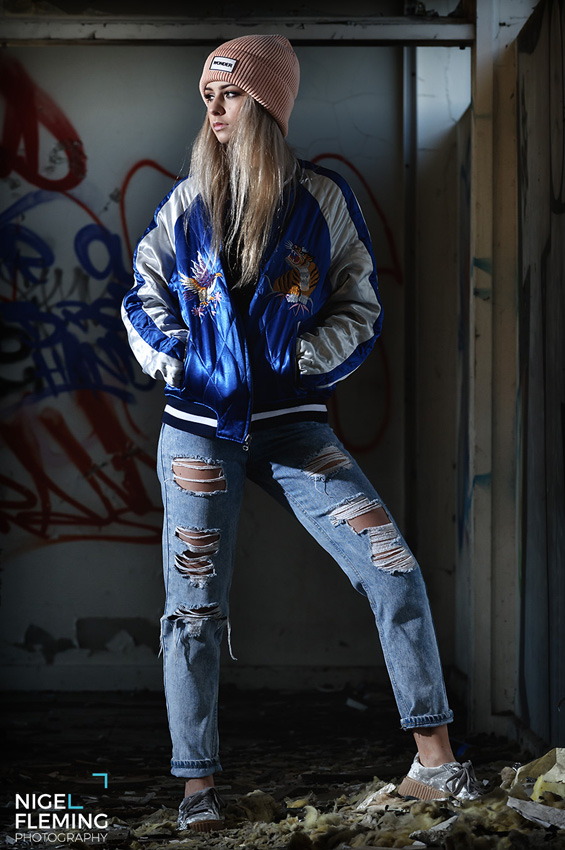 We then moved down the corridor. Here I decided to really step down the exposure of the natural light by quite a bit (see below photo) and I brought in an off-camera flash from camera left. 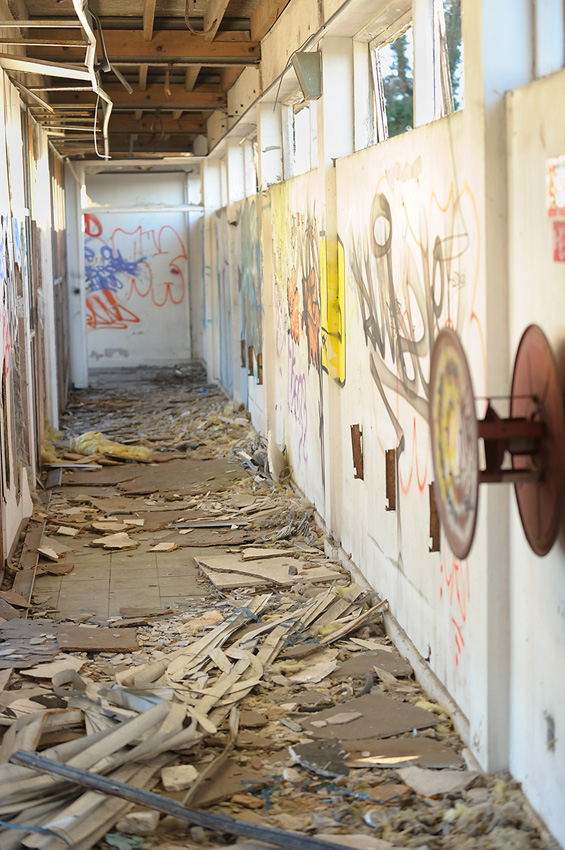 This was how the corridor looked in reality before under exposing it for the previous photo above. 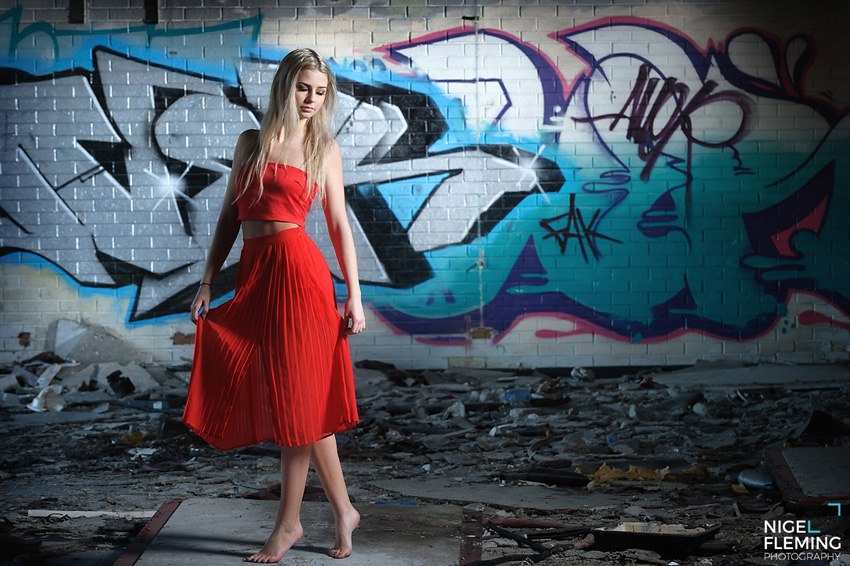 This was the final setup of the afternoon, and probably my favourite. I placed Zoe quite a bit forward from the back wall because I wanted to light it independently. Light on Zoe was from an off-camera flash through a large soft box. The back graffiti wall was lit with a hard light off-camera flash. There was very large floor to ceiling windows on the left and I set my exposure to use this natural light as fill light. The main off-camera flash on Zoe was almost perpendicular to camera position, so the fill from the window was needed to lift the shadows which would otherwise have been very deep and dark on the ‘unlit’ side of Zoe. 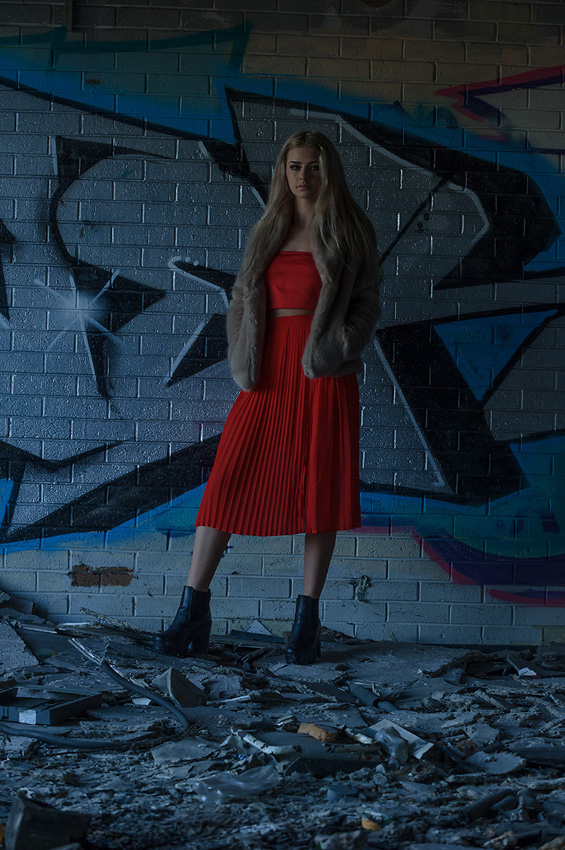 This shows my natural light exposure for the previous photo, before flash was added.

I hope to be running an off-camera flash day in the next few weeks. If you would be interested in booking a place please click here and send me a message.